Scared of Fading Away in Midlife? Empower Yourself Now to Do What You’re Here For 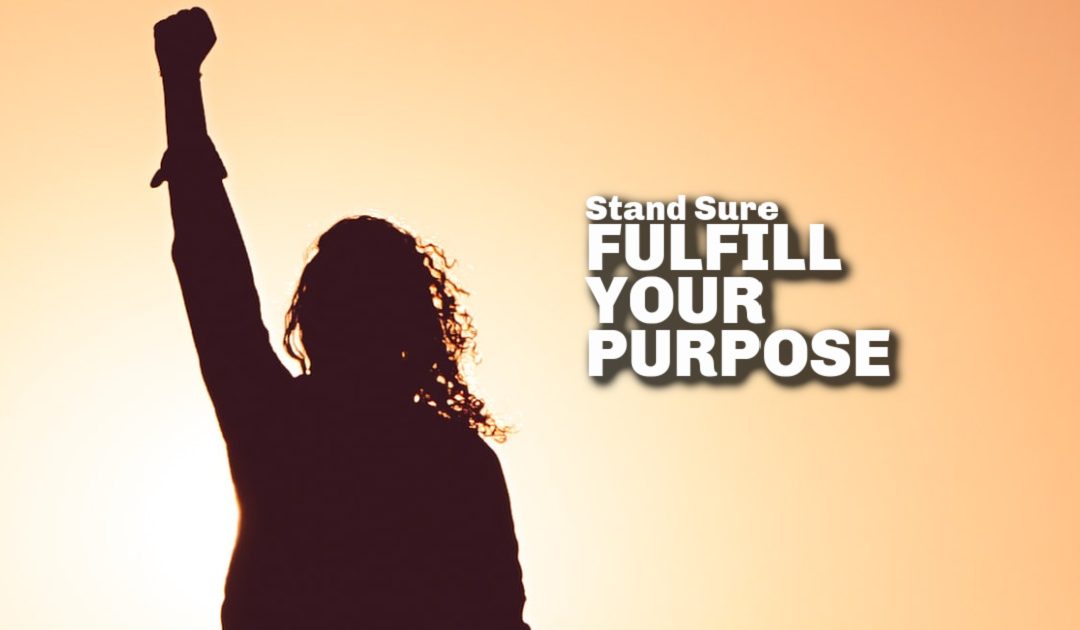 Midlife is the time to step into your purpose, to empower yourself to fulfill your mission, to become everything you were meant to be – and to do what only you can do.

“Men age like a fine wine, and women age like milk.” The whole idea of women becoming invisible in midlife reminds me of the fish that doesn’t know it’s swimming in water. It’s like some weird myth, an odd and awful fate we’re told is coming for us all.

Sure, we all hear stories of the middle-aged woman who got passed over romantically or professionally. Or others who feel unheard or dismissed. Some get up in arms and rail against being deemed irrelevant. Some retreat quietly to the wings. Totally their choice.

But I’m going to call bullshit on this so-called inevitability. I think it’s a cop-out. We were each put here to find and fulfill our purpose. Into every one of us, greatness has been sown. It’s our responsibility – duty, even – to nurture our gifts and unleash them in the world.

I’ve been thinking a lot about this over the past few months. Now, it’s time to share. Maybe it’ll help you, too. 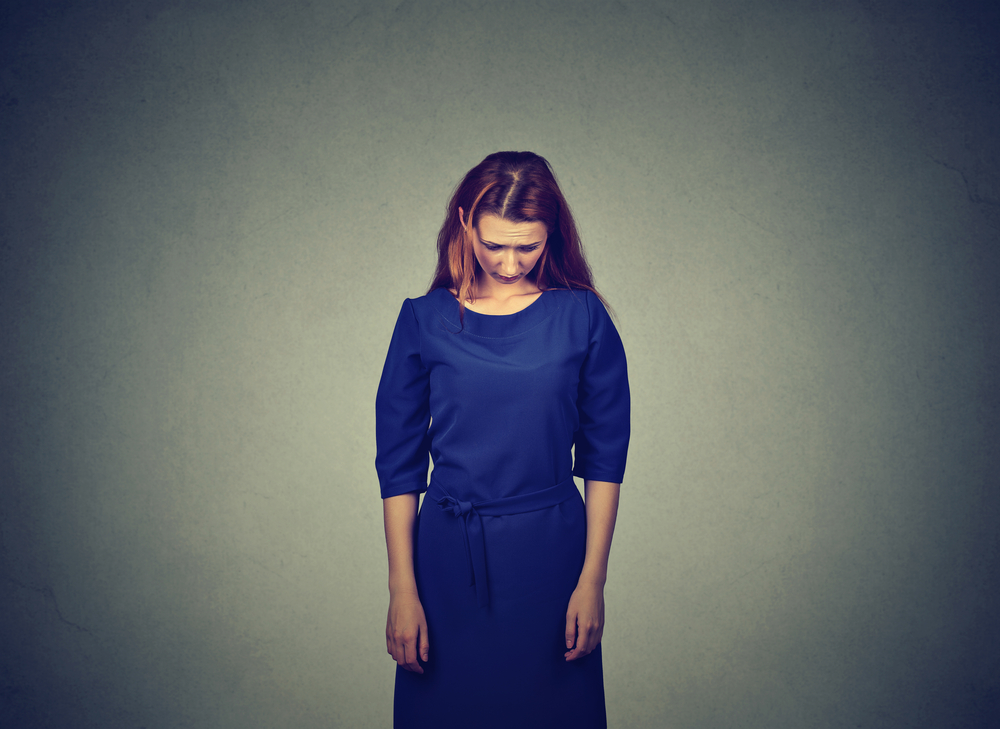 As a little kid, I was so shy that my dad finally took me outside to meet the kids when we moved to a new neighborhood. The thought of just walking up to them, introducing myself, and playing kickball with them was terrifying. Eight-year-old me remembered earlier rejections and decided it was safer to stay home and read instead of taking another risk.

I’d somehow gathered that blending into the background was the safer choice. Well, if by ‘safer’ you mean lonely, isolated, and robbing the world of your unique gifts, talents, perspectives, and presence… sure. So, while I was mortified at the moment, that forcing out of the nest was absolutely the best thing.

I wish I could say I learned that life lesson for good at age eight. But no.

That preposterous timidity grew like an invasive plant species in my life. It led to lots of people-pleasing, kept me on the sidelines when a big part of me wanted to join the game, lured me into lots of self-induced isolation, and probably cost me hundreds of thousands of dollars.

Life is too short to play small. There’s a big difference between playing not to lose – and playing to win.

So, Timidity, you’re on the shit list. Sure, you meant well, and I appreciate the good intentions. But it’s time for you to scram.

Behold, four challenges I have thrust before your eyes! Should you accept, you will utterly transform how you show up in the world and what you create in it. 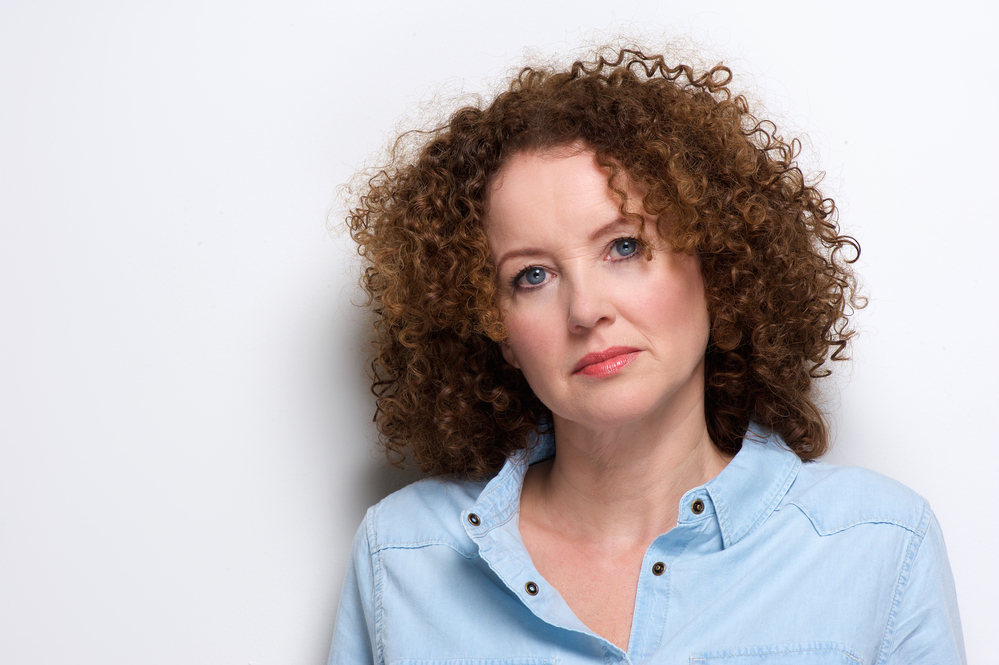 You can’t empower yourself to live a wildly satisfying second half of life where you make your best contributions to the world if you don’t even know what you want. Ask a hundred midlife women, “What do you really want?” and the most common answer you’ll hear is, “I don’t really know.” (Doubt it? Ask where they want to go out to dinner! You’ll get the same answer.)

Some of them are lying.

They know. They just don’t feel comfortable saying what they want – even to themselves. Maybe, like me, at some point, they taught themselves that resilience and strength meant getting by on life’s scraps, essentially saying, “I require no maintenance or care. I’m fine.” Try that with your car and see how it goes.

Some have put others’ desires before theirs for so long that they don’t even realize they no longer hear their own wishes’ voice. They’ve heard how unselfish they are, what a great mom because they live to serve, what a great woman behind the man… that kind of invisibility-inducing false compliment might be the deadliest of them all.

Ask little kids what they want, and they’ll rattle off a list like they’re paging through the old Sears catalog at Christmas. (Remember them?) They haven’t learned the warped rule that you aren’t supposed to want anything.

Getting back in touch with what you want… what you REALLY want… takes practice.

Like when atrophy sets in, it can feel weird exercising your “what I want” muscles. It can even feel selfish and wrong to verbalize what you want. But I’ll challenge you on that. Your desires don’t disappear just because you won’t admit them. And that’s a good thing. What you want is unique to you, and it’s part of what drives you to make your extraordinary contribution to the world. Becoming aware of what you want will propel you to make it so.

Do This to Empower Yourself: Get quiet with yourself (getting outside helps). Imagine there’s absolutely nothing stopping you from having whatever you really, really want. Then say it. Write it. Even tell someone about it. 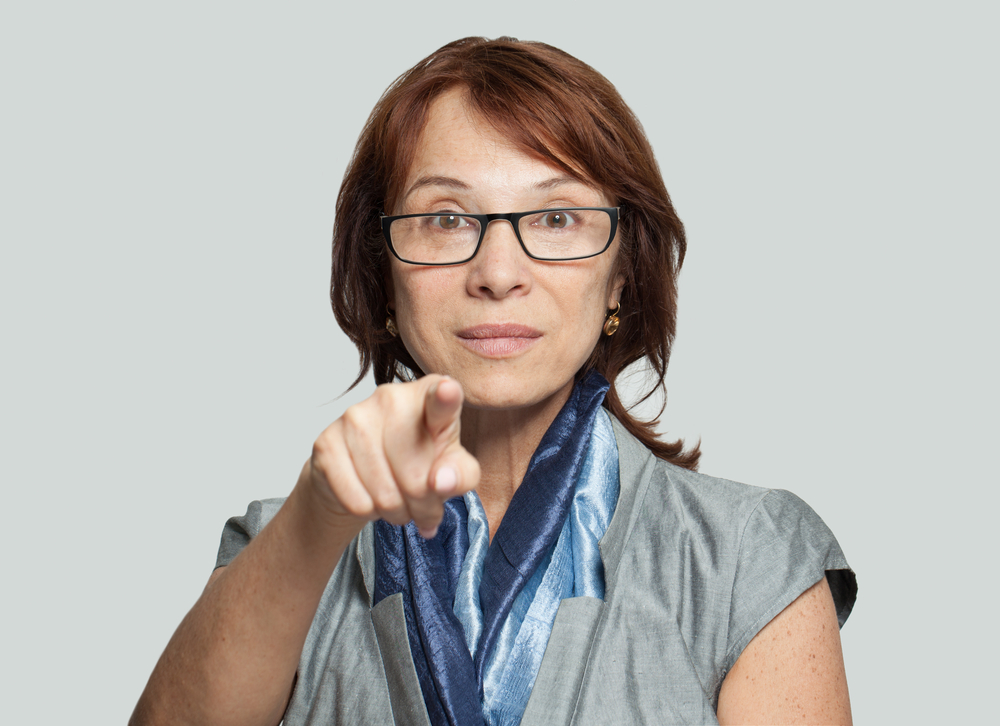 Challenge #2: Watch Your Mouth (and Keyboard)

Self-deprecation works great for comedians. But in real life, it’s a cop-out.

How’s it show up?

What is self-deprecation, really? It’s a way to kick yourself first, so nobody else feels the need to do it. It’s bowing and scraping before a perceived audience of ruthless critics so they can see you’ve already eviscerated yourself… so they won’t. After all, it somehow feels less painful if you cut yourself rather than someone else doing it.

But here’s the thing.

There is no audience. Not one that matters, really. And certainly, not one that knows the truth about you better than you do. Haters might hurl insults at you, but the old “I’m rubber. You’re glue. Whatever you say bounces off me and sticks to you” saying is dead-on here. Seriously, humans typically criticize others for the same flaws they’re trying not to see in themselves. That becomes clearer as we age (both when we give and receive criticism).

You do not need to hide. Certainly not behind a wall of your own insults. The words you use about yourself will empower you to stand sure or leave you cowering. Be careful which you choose.

This may be a tough habit to break. It will take practice and vigilance.

Do This: Start with what you write – particularly on social media or in emails. Draft your words normally, whatever way your brain sends them to your fingers. Read what you wrote. Would you want some stranger to say these things about someone you love? If so, delete those bits and rewrite them in a way that empowers you. Write with abandon; edit with ruthlessness. 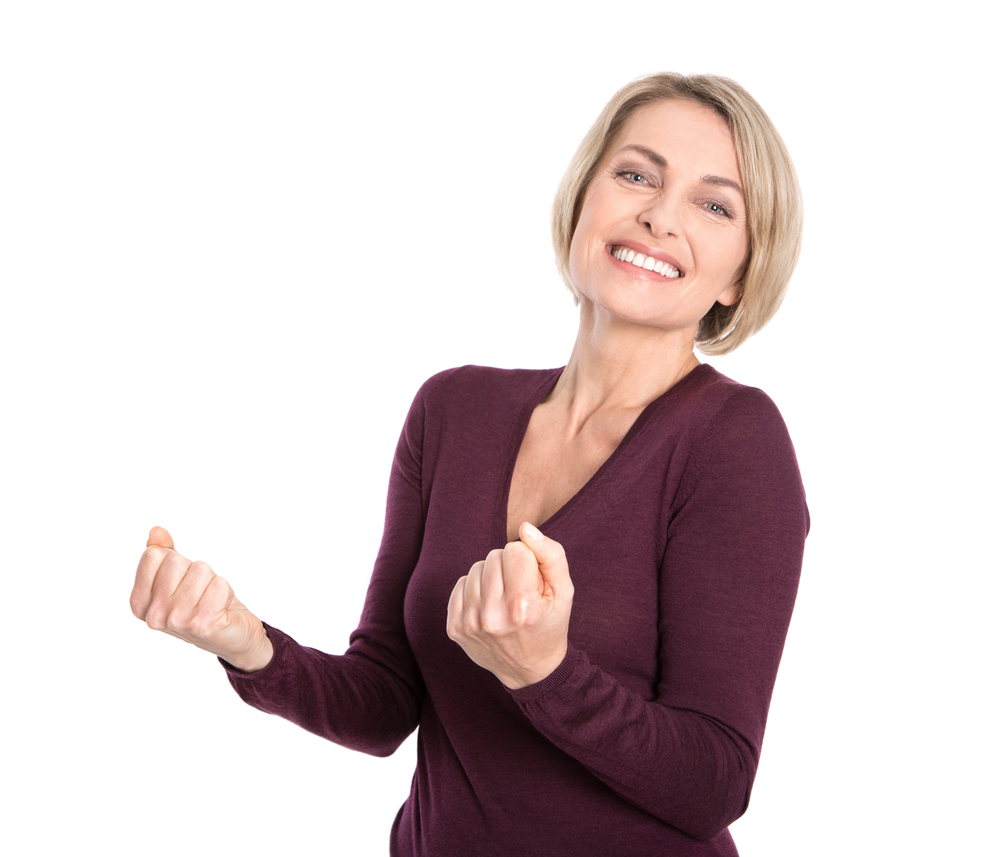 We all have weird leftovers running our lives. (Not that plastic container in the back left corner of the shelf in the fridge.) Somewhere along the line, someone made an off-handed remark or otherwise slighted you – and you tucked the memory away so deeply you might not even remember it. Find them and you’ll empower yourself to break into a new level of freedom.

I have a weird example.

When I was a kid, I remember our family getting a gas grill. My dad told my brother and me not to touch it – a smart and reasonable safety warning.

I obeyed. Until I was like 45 years old! It wasn’t a conscious thought, “I’m not allowed to touch a grill.” But it was in there – this hesitance to ignite a propane grill.

I remember telling a friend in Fiji about my weird aversion to grills. She’s a no-nonsense, very bold woman. She kind of looked at me like I was nuts, then said, “Sue, you’re a big girl now.” And, of course, I am. It was time to recognize that bizarre ‘rule’ I was living under and choose what works better.

Maybe you have some similar holdovers from childhood that you’ve bizarrely held onto. Worth looking at and challenging.

Confession: I still have never watched “The Bad News Bears,” but I have watched “Grease” (waiting for a bolt of lightning to strike!).

Do This to Empower Yourself: If you encounter some weird resistance that takes you back to childhood, take a look at it. Maybe it serves you, like “Don’t touch the hot stove.” But perhaps it’s a limit you can lift safely. Doing so can empower you in a surprisingly satisfying and seemingly small way. 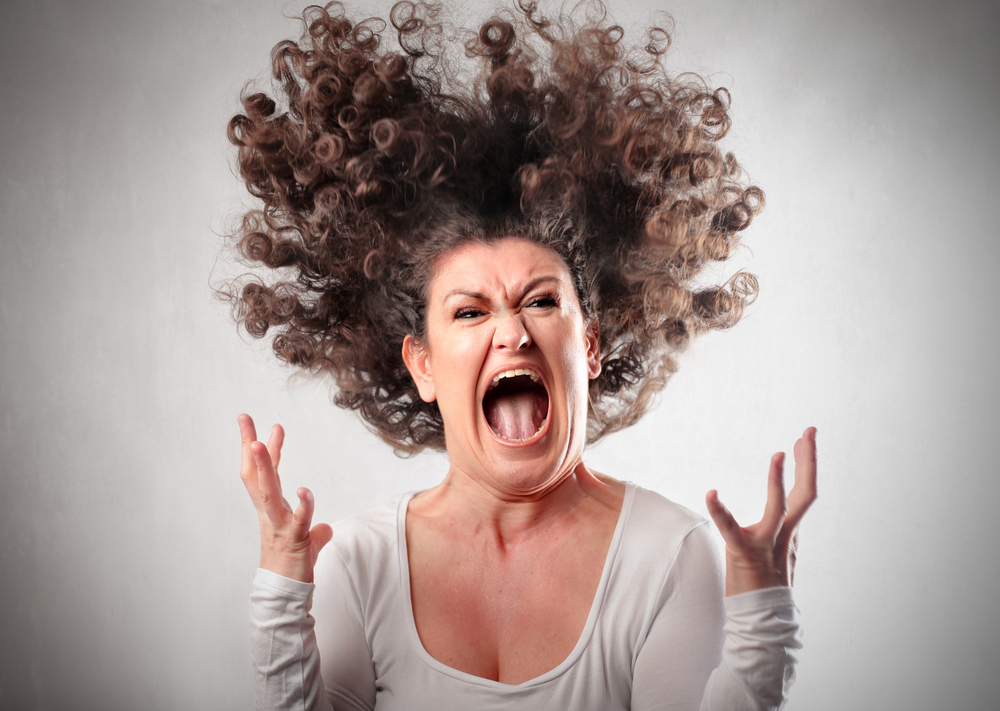 Challenge #4: Be Your Own Champion

“What a bitch.” Many women (myself included) surrender a lot of personal power because we don’t want people to perceive us as bitches. That avoidance keeps us quiet. It leads us to ignore red flags. It puts us in unsafe situations.

As a college student at Rutgers, I remember walking through New Brunswick to get from one campus to another. Sometimes men would whistle or call out. It felt terrifying. I’d just grab my pepper spray tighter and walk faster, hoping they’d lose interest and go away.

But looking them in the eye and saying, “Fuck off” or the equivalent never crossed my mind. Standing my ground seemed more dangerous because they might see it as a challenge (maybe it was).

That same aversion to offense contributed to me going bankrupt decades later. I ignored red flags with the two men I’d partnered with on a real estate investment. I didn’t feel comfortable saying, “Wait. No fucking way. You guys are nuts if you think I’ll be the only one at risk here.” But, I told myself I didn’t know as much as they did… and that they were probably right and this was probably normal… and that I couldn’t speak up without risking the deal.

I’m not suggesting we should go around screaming like shrews. There’s more power in quiet strength. I don’t feel like I need to shout to be heard. But there’s also no reason to stay silent when I’ve got something to say.

If you take a self-defense class, they’re going to teach you to shout something like,

There’s a reason they have to TEACH that – especially to women. Many of us have learned to be quiet – even when there’s a lot at stake. It can feel bizarre to hear yourself shout like that. Do it anyway.

Do This to Empower Yourself: Next time you’re alone in your car or home, practice. Stand your ground. Use your deepest, strongest warrior-like voice, and shout, “NO. BACK OFF” or whatever you want to say. Repeat until you feel strong. You would do this to protect your kids… learn to do it for you, too.

Trust Yourself, Empower Yourself

Hey. This second half of your life is going to go fast. Faster than the first half – and that’s crazy even to consider.

You aren’t done. If you were, you’d be gone.

You’ve got exciting adventures ahead, lives to touch, creations to make, delights to enjoy, crowning glories to achieve. Midlife is not the time to shrink back.

Everything you’ve learned and done until now has perfectly positioned you to find and fulfill your purpose. You’re here for a reason. Deep inside, you have a voice that’s urging you onward. It may take practice, but you can learn to hear yourself – and trust yourself. You owe it to yourself, your loved ones, and the whole wide world to empower yourself to be and do and have what’s on your heart.