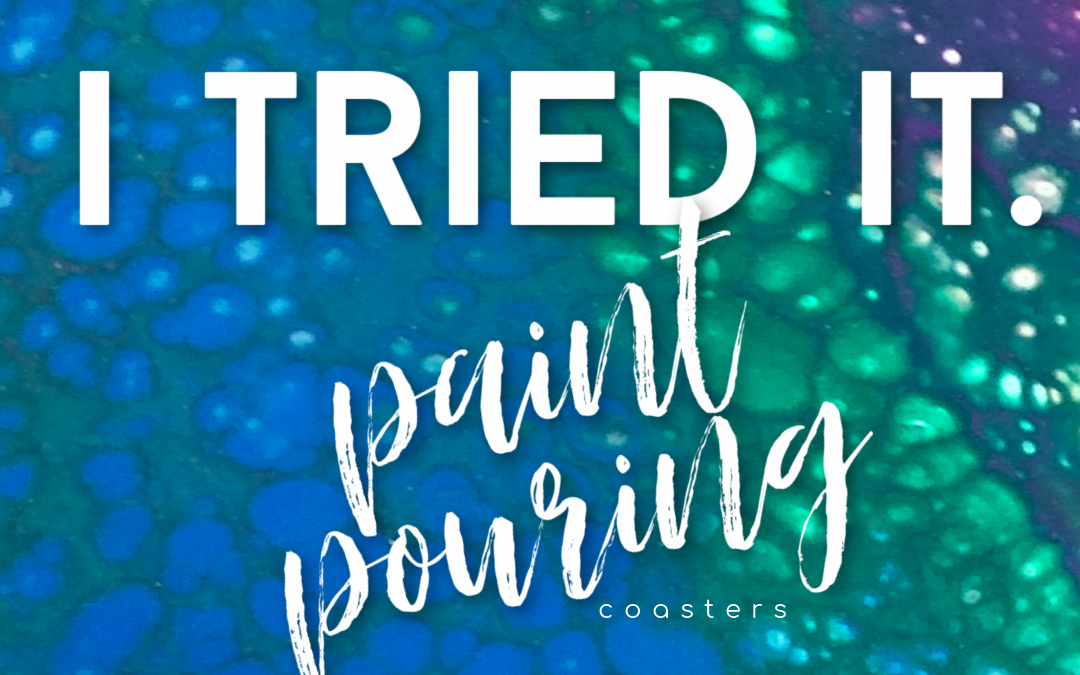 Confession: I am a hobby addict. I’m always on the hunt for new hobbies to try. Now, at least.

Like many moms, the decades of raising kids were so busy that hobbies were tough to get into. Between working, driving people everywhere, having a little social life (very little), and trying to keep the house from looking like a hurricane went through it, my hobbies were pretty half-hearted.

Except knitting. That was a big one for a long, long time. I’d knit in front of the television and on long drives. Now I don’t watch much TV (though Blacklist currently has my attention most evenings – James Spader’s character is fascinating to me!). And when I’m on a long road trip, I’m usually driving. Also, having three dogs and two cats – all curious – makes knitting a challenge I don’t feel like undertaking.

Also, most of my hobbies have been (and are) kind of solitary endeavors. 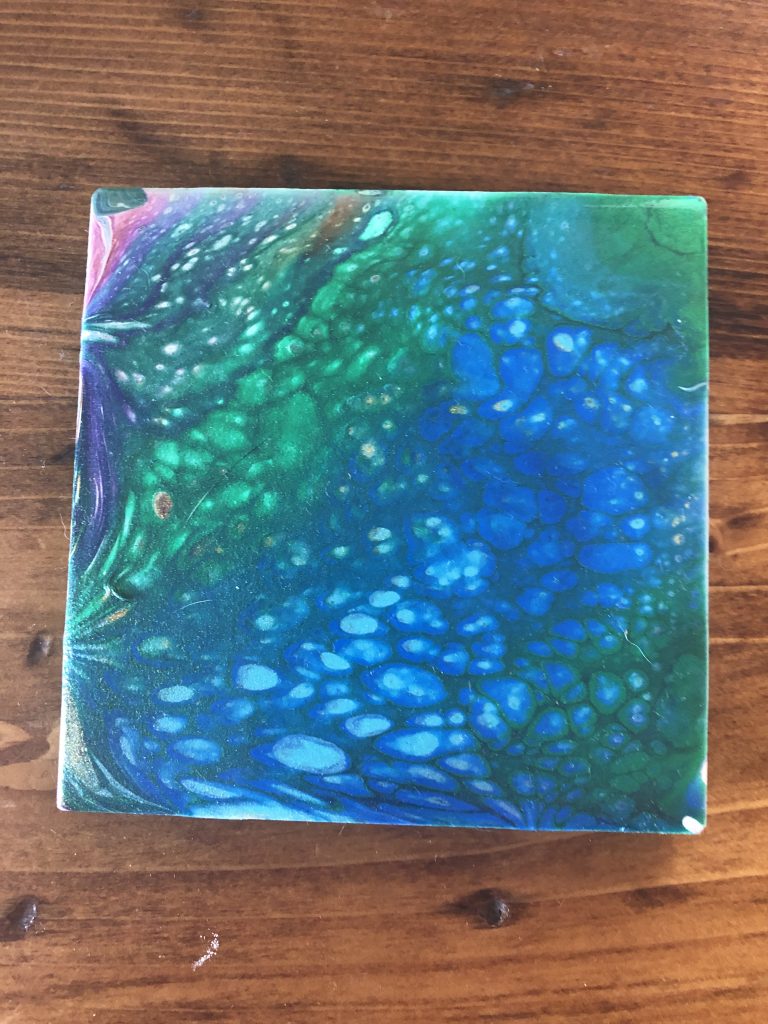 Best Gift Ever: One of My Sisters In-Law Moved Nearby

Probably one reason most of my hobbies have been solitary is that I’m not exactly social. I used to joke that I’m far more charming in writing than I am in person. (It’s probably still true – talking that way about myself just wasn’t a habit I wanted to continue.) Self-deprecation aside, it’s definitely true that as an introvert, solo hobbies are more my thing.

When my brother and sister-in-law moved nearby, I wanted to do fun stuff with her, too! Years ago, we’d gone to one of those bottle and brush painting parties. It was a blast! (Confession: I balked at painting the paintings they guided us to paint that night. Instead, I wanted to paint this rusty old VW Bug I’d fallen in love with – got to love a nice patina!)

So, now that she’s back in town, it was time for some new hobbies to try. We decided on an acrylic paint and pour deal we found through Groupon. They held it in some pretty event space in the back of a taproom and liquor store. Since it was early afternoon and I’d need to drive home, I declined an adult beverage. Who knows how this craft would have turned out if there had been a nice whisky involved! 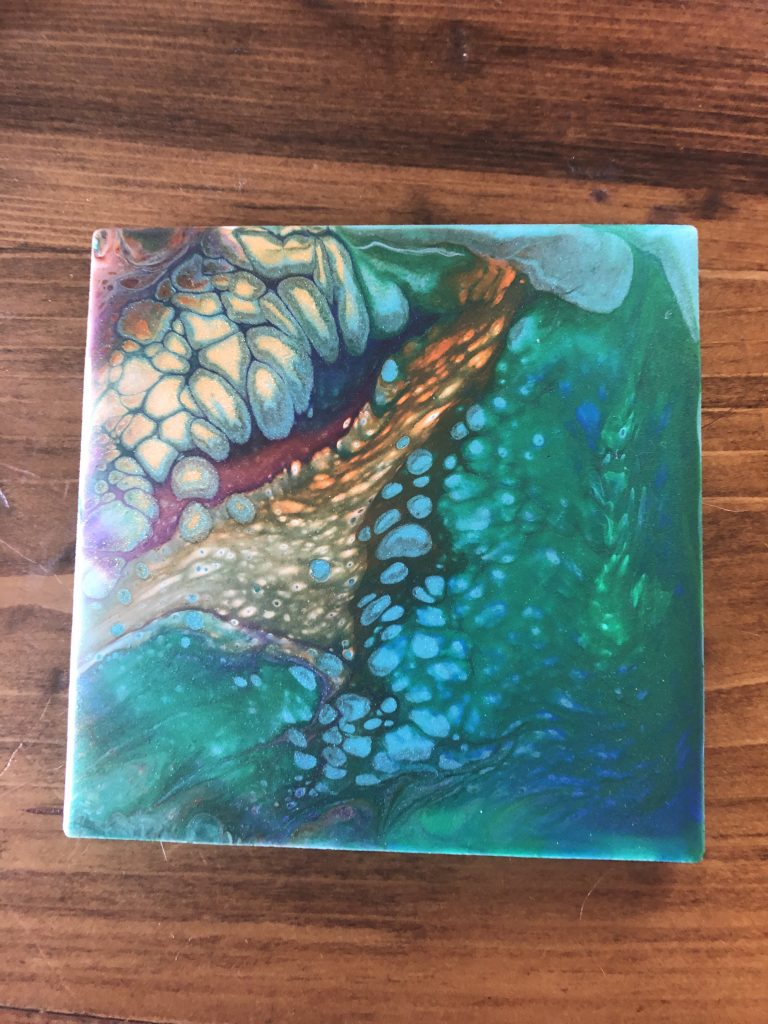 What Is Paint Pouring?

You’ve probably seen this. Abstract, colors swirling and splashing across a surface, almost like a galaxy of hues.

I’d seen large canvases with this technique before. A colleague of mine made a couple for our company’s headquarters, and they are gorgeous. Of course, she’s extremely talented and has an amazing eye for decorating and beautifying spaces. So, I wasn’t expecting to get results like hers.

But still… they came out pretty cool!

We had the choice of doing a 12”x12” canvas or a set of four coasters. We both chose coasters because the canvas seemed too small. 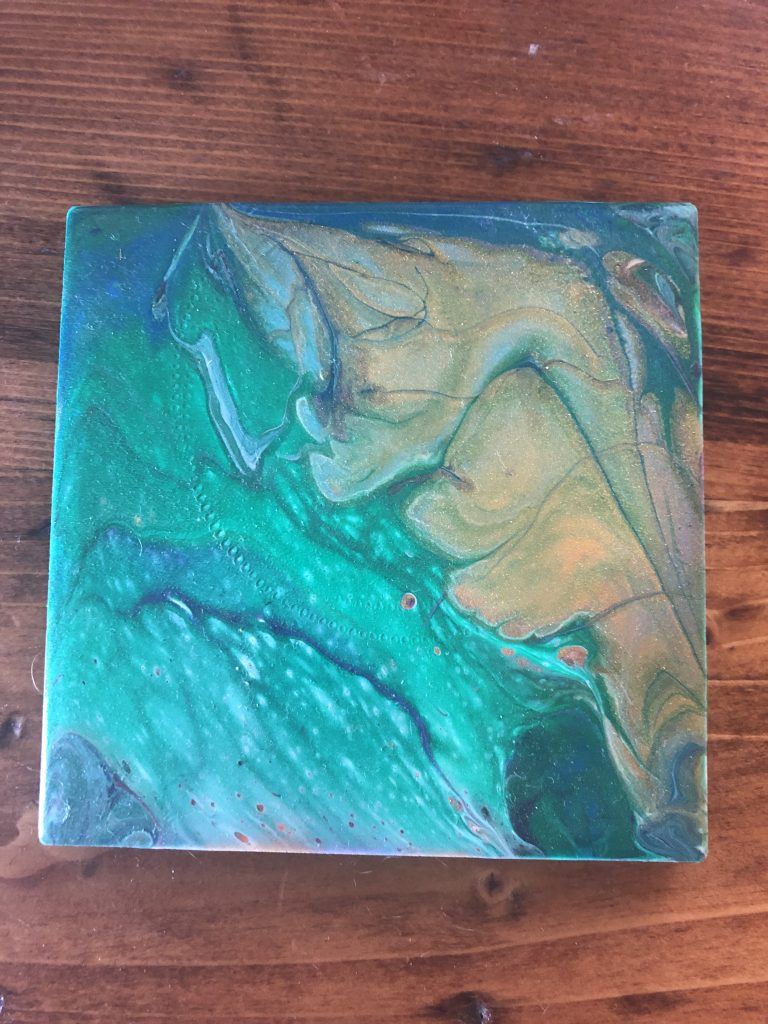 You may be able to see the imprint from the mason jar I set on this one before realizing these coasters should be just for decoration. It left a mark!

Here’s How You Do Paint Pouring

I wish I’d thought to video the process. But watching someone who knows what they’re doing might be more useful anyway!

Want to try it yourself? There’s a bit of mixing needed if you don’t get a kit like this one. These paints are premixed with the stuff that makes the poured effect possible. (It’s an Amazon affiliate link – so if you buy, just know you’re helping to fund this blog!)

Here’s How My Coasters Turned Out

I have a bit of a peacock obsession, so that’s how I chose my colors. The coasters came out pretty. The instructor coated them so the paint wouldn’t come off, and she also attached cork bases so they don’t slide off the table.

As pretty as they are, though, I have to admit that I don’t really use them. They’re on my desk and I love to look at them. But I don’t trust them. (Or maybe, I don’t trust me?!) They’re still slick enough that if I put a liquid-filled glass on them, there are issues. Either the condensation makes the glass stick to the coaster before crashing to the floor. Or, the glass slides right off the coaster. Either way, just seems like they’re more form than function!

Although with two cats who like to stick their paws or heads into glasses and mugs that I’m still drinking from (of course, when my back is turned)… there’s another use. The coasters make a great cat shield when I cover the mug, as it sits on a more functional coaster.

Will I do it again? Sure – if the opportunity arises. But I don’t think this will become an ongoing hobby. There are too many other new hobbies to try to lock into this one. 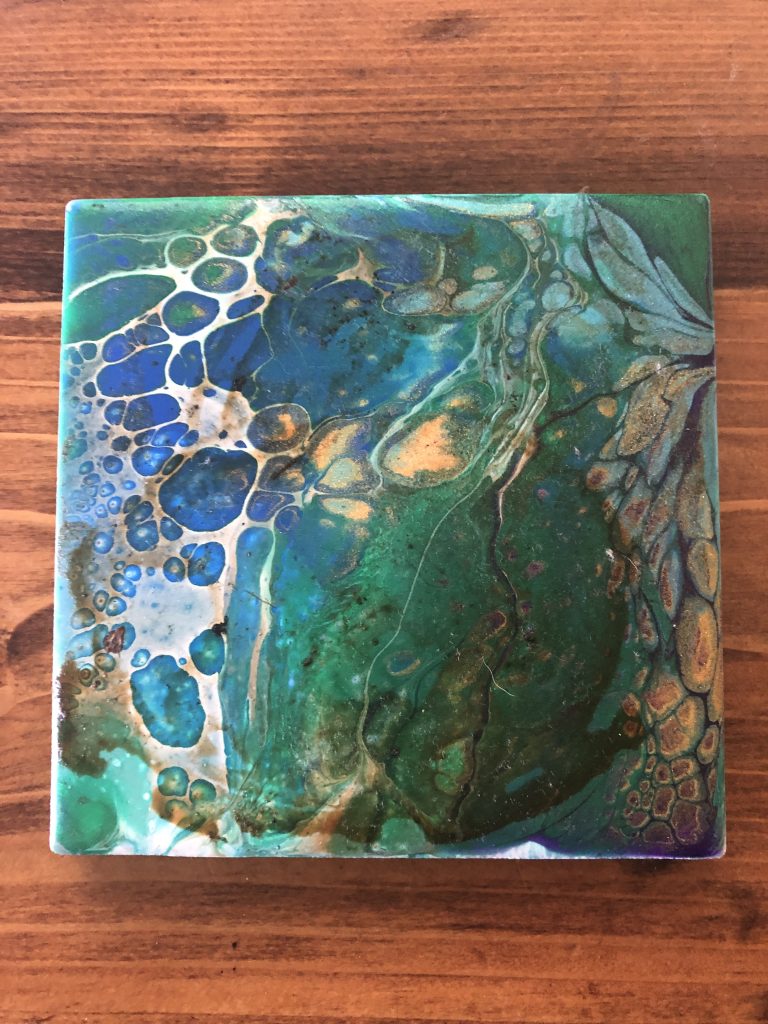 Have You Discovered Any New Hobbies Lately?

I’d love to hear about them in the comments. Having a hobby (or ten) just feels good in the brain – and sometimes you end up with something cool to show for it.