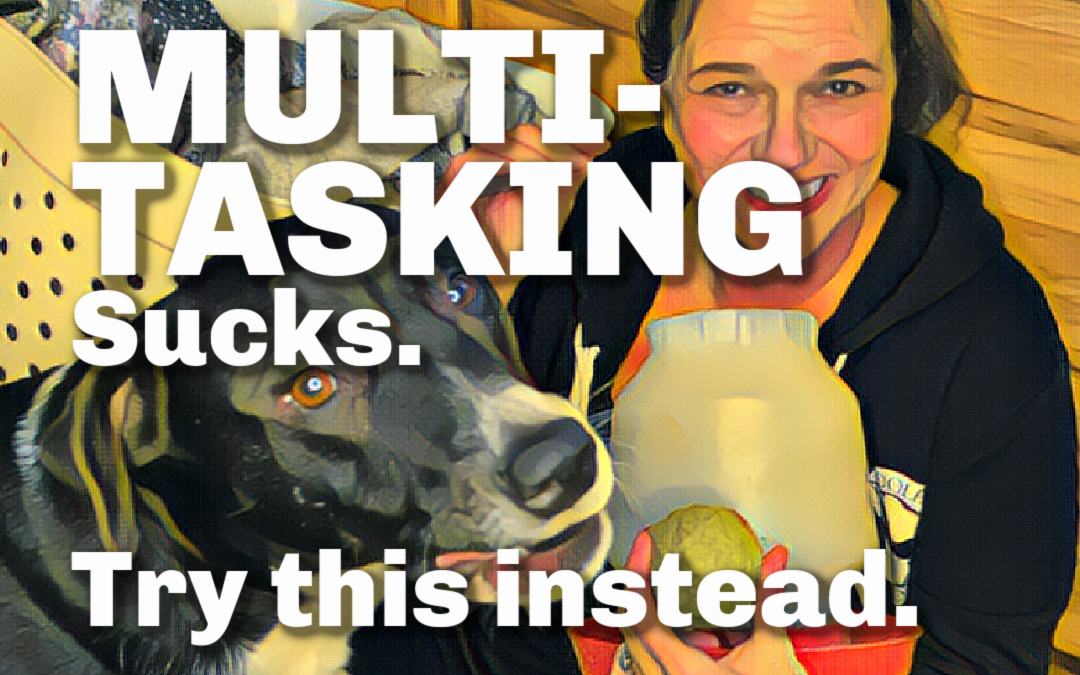 Multitasking used to make me feel so productive. That is, until life started feeling like a browser with 73 tabs open.

Here’s what I’ve discovered about getting stuff done and enjoying the process. 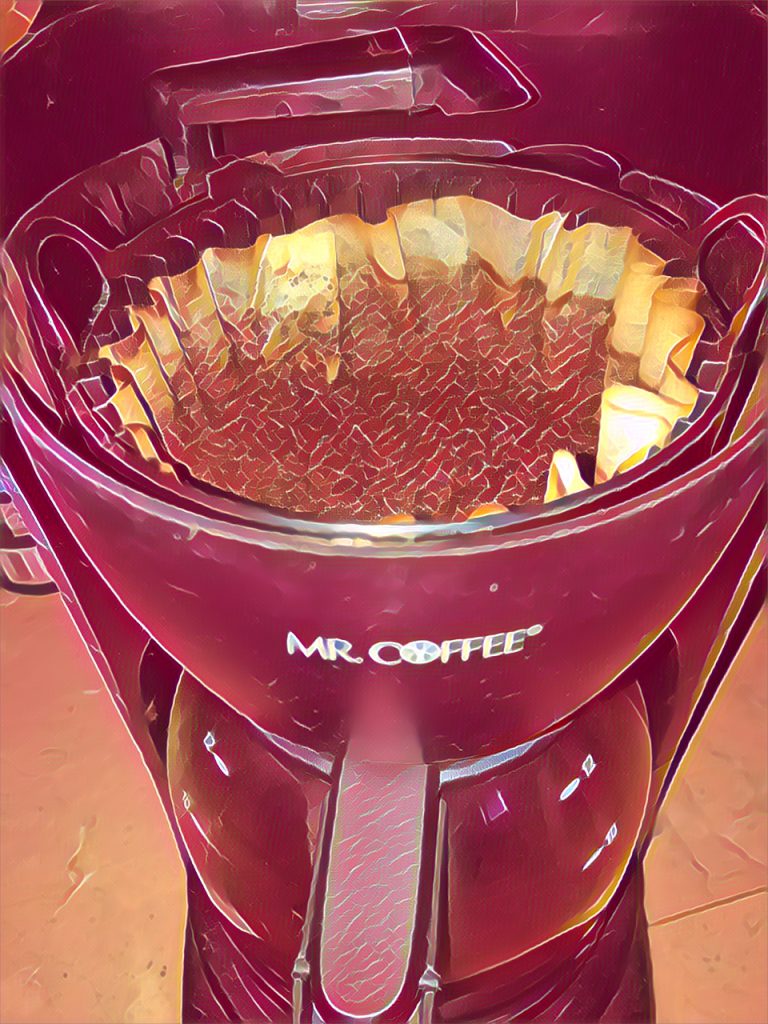 Both coffee pots were empty. Again.

I was the secretary for an accounting firm, and let me tell you this. NOBODY drinks coffee like accountants do. There were days our small team of ten went through about a pot per person. Everyone made a new pot if they happened to notice the old one was empty. But as the machine was in the room with the shredder, copier, and fax (remember that screech?!), I remember making a lot of coffee.

Water in. A single filter into the basket. Cut the coffee pack, dump it in. Push the brew button. All done while simultaneously answering the phone, ripping staples out of piles of paper for the shredder, taking a fax off the machine and delivering it, trying to find a file for one of the partners, and probably chatting a bit with a colleague.

Six tasks completed well all within the same few minutes. The pace felt exhilarating (well, as much as that’s possible in an accounting office!).

[Fast forward a couple of decades]

Bring feed out for the chickens. Notice their waterer needs cleaning and refilling. Wash it and stick the hose in to refill it. Dog brings me her ball. I throw it and remember I haven’t transferred the wash to the dryer, so I cross the backyard to the laundry room door. Move the laundry. Remember I need to take some venison out of the deep freeze for dinner. While I’m in the garage, I notice a few items I’ve been meaning to bring back into the house, so I gather them in my arms and try not to drop anything. Come back through the house, put the meat on the counter, and start putting those garage finds away. One goes on my desk. That reminds me to hit “export” on a video I edited for hubby’s VW restoration shop. While waiting for it to render, I switch back to a writing project for a client. It requires research, so I have seven tabs open and our wifi is struggling to keep up. 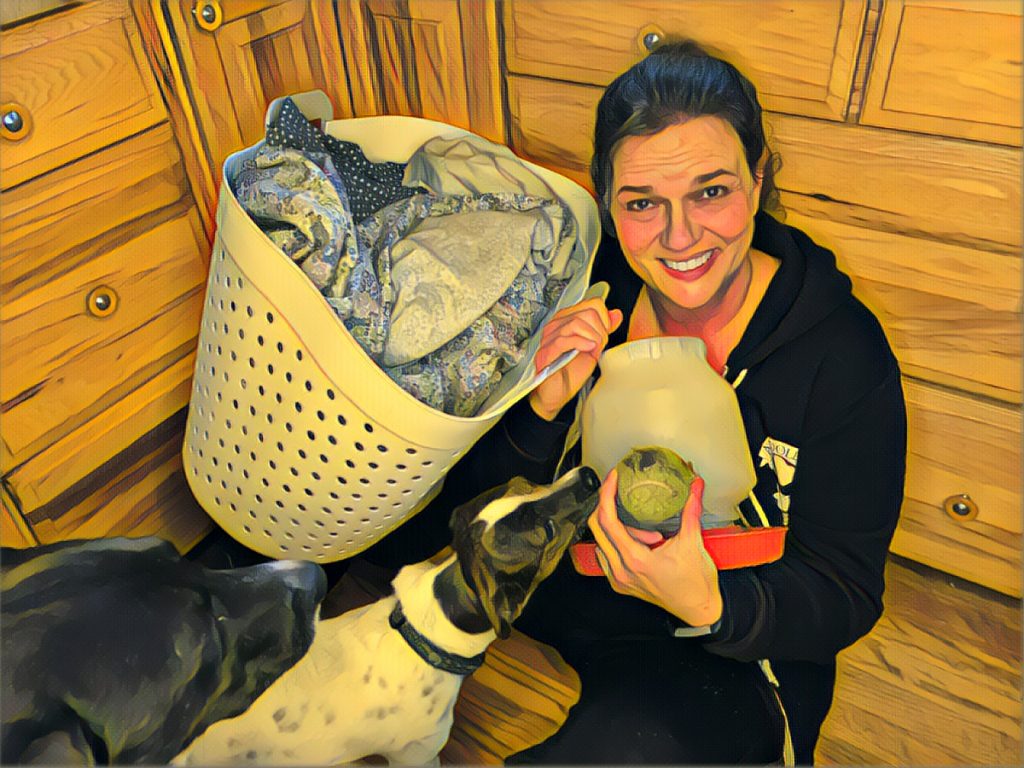 Notice the sound of water running. Check the faucet – no. Oh yes, chicken water! OH no! Poor dog is waiting for us to resume our game of fetch. There was also a basket of laundry on the bed, folded stuff folded, but hang-up stuff still draped and waiting. I make a note to come back to it. Puddle in the yard from water overflowing the waterer, and the chickens are now just drinking from it like a pond. Dog is patiently following me around with her tennis ball in her mouth.

You know the feeling. Being really busy doing a whole bunch of things at once feels so freaking efficient. Look at how many items you can cross off the to-do list!

But if nothing gets completed, you can’t cross it off.

Multitasking sucks the life out of your life.

And because I’ve been doing it fueled by half a pot of coffee, this became my reality. (I kind of needed this sign!)

Until I Said No More Multitasking

Not only had multitasking become a way to get a dozen things halfway and poorly done, it also took a toll on my short-term memory. Opening way too many real-life browser tabs felt like that game, Concentration. Living with that as my standard operating process, I began to feel like I was losing my everloving mind. I was crazy busy… teetering on just crazy.

3 Reasons Multitasking Is Hazardous to Your Health

#1: The insidious message behind multitasking

Inherently, the idea is one of scarcity. There’s not enough time to do everything that needs doing, so you’d better do multiple tasks at once. Of course, you probably end up spending more time all-told because of the messes left in your wake. Time is, indeed, the one asset we can’t create more of – but multitasking falsely promises it can.

#3: What are you doing to your brain?

Get a group of people together who are over forty, and someone’s going to joke about how they enter a room and then wonder why they’re there. If you know that feeling, what you’ve experienced is a lapse in your “working” memory. By reinforcing the habit of multitasking, we weaken its ability to concentrate for extended periods – or even for long enough to remember why you went to the guest bedroom in the first place.

Inc. published an article about a longitudinal study some researchers from Stanford performed regarding multitasking’s effect on working memory.

After examining over a decade of data, these Stanford researchers found that “heavy” multitaskers significantly underperformed “light” multitaskers on tasks that required working memory and sustained attention. Multitasking, in other words, went hand-in-hand with a diminished ability to process memories and sustain a single point of focus…

Instead of building concentration, multitasking reinforces the mindset that psychologist Linda Stone famously calls “continuous partial attention.” It turns this scattered state of attention into a habit.

How to Break Your Multitasking Habit

Assuming you’d prefer to not feel like you’ve lost your marbles because of multitasking, you can rewire your brain and see rapid improvement. Brains are so cool like that.

Recognize Why You Do It

Multitasking can result from being too busy. But it can also creep up as a habit you use to stave off loneliness and boredom. We’ve become especially hooked on tiny dopamine hits throughout the day. Every scroll through social media gives us a little hit, as does every notification, and even just pausing to go check email. It can be really hard to just be quiet and still with our thoughts – but every time we cave into the temptation to get another hit, we become more addicted. Think about what’s driving you to multitask. Awareness is the first step toward freedom.

As we get older, time feels like it speeds up. We begin to treasure our time more than we did when it felt like we had an endless supply. Go too far with this, and you might feel panicked like there’s a ticking clock you can actually hear. But a healthy recognition of the finite nature of our time here is a good thing. Rushing through the hours on autopilot robs us of tiny pleasures, ways we can “gather the happy” and fill our happiness banks. Instead of cramming so many actions into the same moment, pay attention. What sensations do you experience? What’s your favorite moment when you do even mundane tasks and actions?

Practice (and Catch Yourself)

If you’ve become a master multitasker, it’s going to take some practice to break that habit. You’ll do well for a while, then not even notice when you slide back into it. When you “come to” from your stupor, tell your brain, “Hmm, I was multitasking,” and then wake yourself back up gently. Be kind to yourself – your brain may have decades of reinforcement to undo.

Recognize the Hidden Benefits of Inefficiency

Tempted to gather fifteen objects that need putting away and roving through your home, distributing them as you go? That’s one way to do it. But especially if you’d like to move your body more, that efficiency robs you of some movement. Seems like everyone wears a pedometer to track their steps. I do, since my work is sedentary. So there’s a triple benefit to doing one thing at a time – you’re “there” for it, you rewire your brain for sustained focus, and you get a few more steps in!

A lot of writers I know use the Pomodoro technique to boost their creative concentration. Essentially, you set a timer for up to 90 minutes, and get to work. You don’t stop until the timer goes off. Then you MUST stop and go do something else (not on a screen!) for about 20 minutes.

You don’t have to be a writer to get great results from this tactic. It works really well for boring tasks, like cleaning. (Anyone else remember FlyLady.net? Marla Cilley was my first introduction to information marketing. But even more, about 20 years ago she helped me go from feeling perpetually overwhelmed as the mother of young kids to having hope that I could master my time and environment. It all starts with your kitchen sink! I still remember setting a timer for 27 minutes and tackling one room at a time.

For those that are new to FlyLady.net the habit we are practicing for this month is shining our sink. It is the first habit I established and this one simple habit changed my life! It can change your life too! ~FlyLady

Wait, What Was I Going to Write Here?

I still sometimes find myself doing too many things at once. Or, like a minute ago, I noticed  the pull to go through the entire FlyLady.net site to see what’s changed in 20 years.

Old habits die hard. But life is too short to miss out on living it.